Hot rest of this week, rain possible next week

THIS MORNING: A sign we're slowly edging into September, the mornings are cooling off a little more, even though it's been hot in the afternoon. In fact, it dropped into the 50s this morning at the Texas Tech Mesonet sites near Friona, Morton, Earth, Hart, Levelland, Muleshoe and Olton. It was down to the mid 60s in Lubbock.

THIS AFTERNOON: It's been another mostly sunny day, with just a few clouds going up this afternoon. The temperature has reached the low to mid 90s across the area.

TOMORROW: Just about a repeat of today. High near 93, a few afternoon clouds. Wind SW/S 5-12mph.

EXTENDED FORECAST: Rest of this week into the weekend it'll just be sunny and hot each day. If you're going to tailgate Saturday, it'll be about as hot as last week. At least the game itself is in the evening, kickoff near 90.

NEXT WEEK: Finally, it looks like the ridge of high pressure aloft will break down. And an upper-level disturbance moving across the western United States looks like it'll bring us some rain. Since it has been so dry for so long, we're playing it safe on the rain chance...just about 20% to 30% for the first half of next week. But if this pattern holds up, we could be looking at some good downpours in our area next week. It also won't be quite as hot.

TROPICS: Hurricane Dorian is making slow progress up the East Coast. Here is the latest forecast track from the National Hurricane Center. 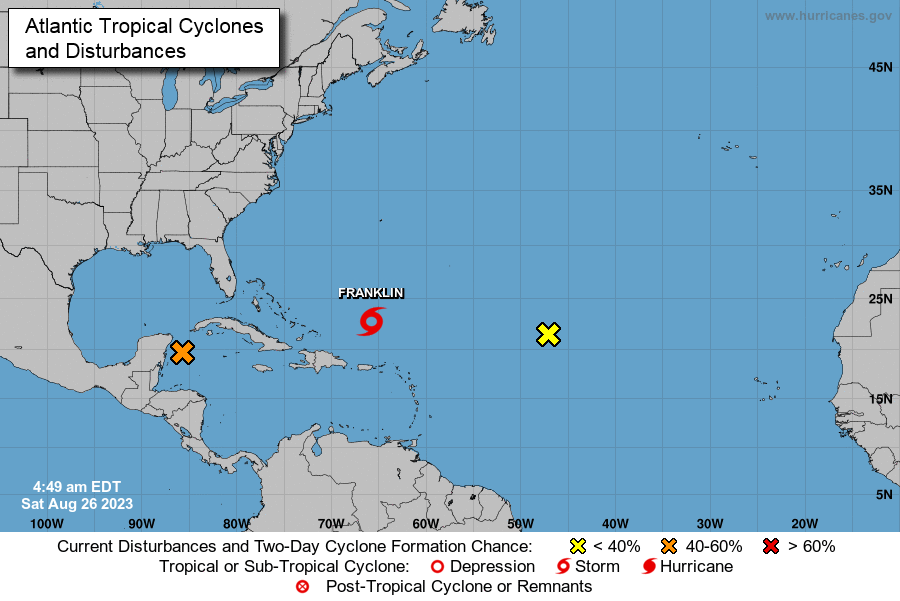 There is also tropical storm Gabrielle way out in the Atlantic, which will move northwestward and not be a threat to the United States.