updated 5:31 p.m. - Some showers have moved out of the Permian Basin into the southern South Plains, moving NE.

These showers are bringing snow or freezing rain. FOX34 VIPIR has even shown a few lightning strikes in this area. Some icy roads are possible, greater risk on bridges. The National Weather Service has issued a winter weather advisory for areas in gray below through Noon Thursday. 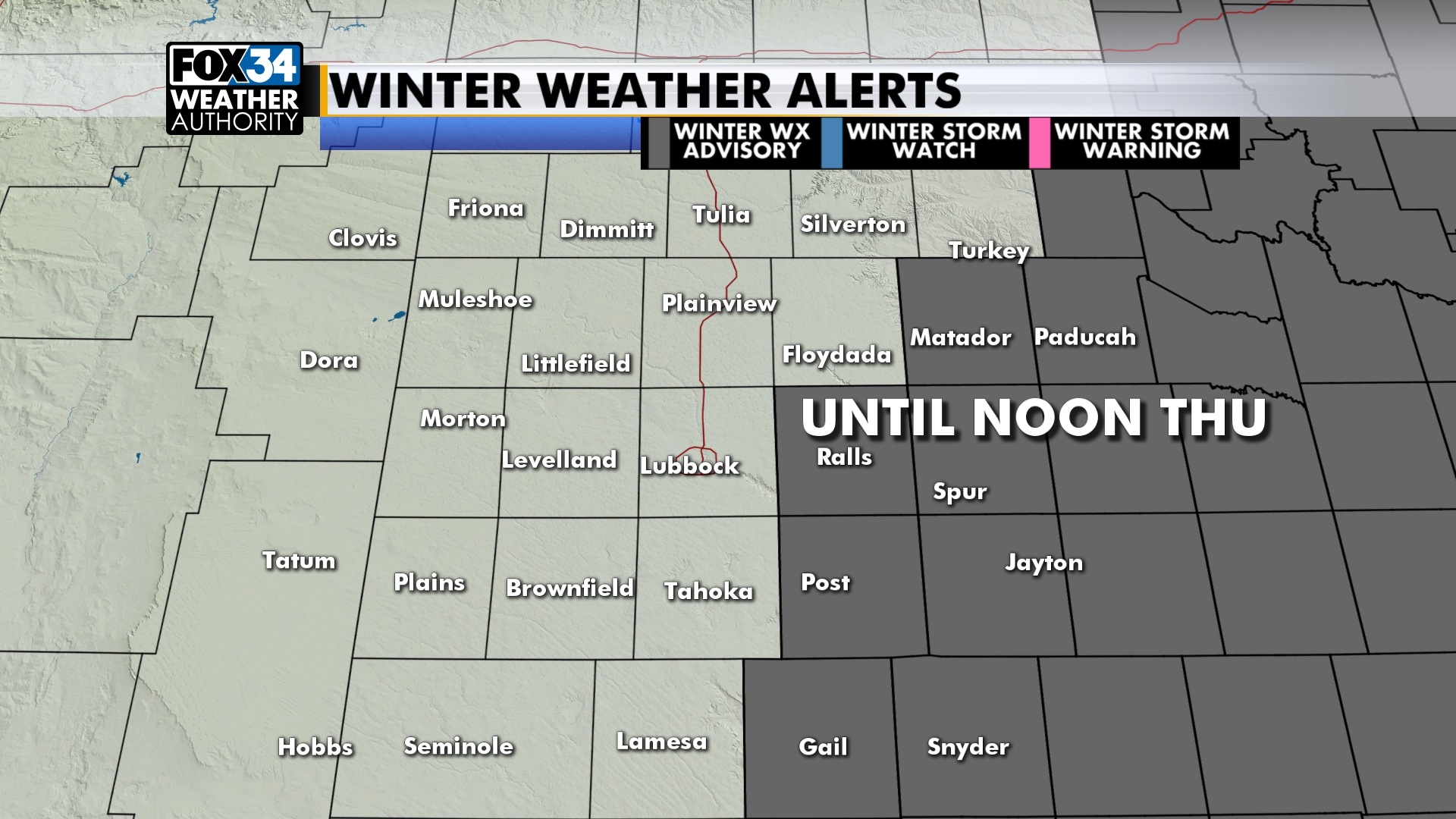 The advisory means minor amounts of wintry precip may cause travel issues. Even in Lubbock some icy bridges are possible in the morning, even though this isn't a major snow storm for our area.

posted 4:25 p.m. - As I wrote in the Weather Blog yesterday, changes to the forecast were expected, even in just 24 hours. A few days ago it looked like maybe we'd get a little bit of light snow. Then late Monday into yesterday the storm system appeared stronger and headed just south of our area, prime to produce a few inches of snow east of Lubbock, maybe an inch or two in Lubbock.

Now we're back to the earlier idea of not much snow here.

THIS AFTERNOON: It's a cloudy day, temperature in the 20s and lower 30s with light wind.

There are some light snow showers moving NE from the Permian Basin. A little more snow is farther west, in southern New Mexico.

TOMORROW: Cloudy in the morning, sun returning by the afternoon. High near 44. Wind NW 8-18mph. There's a slight chance for light snow early in the day.

Latest projections now that the greater risk for snow accumulations much farther east, around Wichita Falls. In our area we're thinking much of the area will see nothing, with the possibility of a light dusting for Lubbock and areas on the Caprock.

Farther east, off of the Caprock an inch or more is possible. But even here the snow potential is lower than yesterday. The greater risk for 2" to 4" of snow is east of U.S. 83 (Childress to Abilene).

REST OF THE WEEK: With less snow expected (or none), we've bumped the temperature up for several days. Upper 50s and sunny Friday, back to the mid to upper 60s this weekend. In fact, we may see some 70s in the area this weekend.

Monday looks windy, possibly with some blowing dust. It may turn cooler second half of next week. But before that we'll have a pretty good stretch of mild weather.

Have a great rest of your day. Bobby will have the latest update to the forecast here early tomorrow.
-Matt