UPDATED 5:45 a.m. Snow picked up across the area overnight and continues this morning. As of 6:00a we are ranging 1-3 inches across the area and more snow is falling. This is sticking to the roads so drive extremely careful if you must get out to drive, otherwise it's best to just stay off the roads. Everything still on track for this snow to come to an end later this morning/ early afternoon.

updated 10:10 p.m. - Rain has picked up to a steady shower, with about 1/10" of rain recorded in Lubbock. Over the southern South Plains we have some locations over 6/10". The rain should slowly transition to a mix then eventually snow by early morning. Forecast is on track from what was posted below.

posted 4:55 p.m. - Even just hours out, this remains a complicated forecast. The good news is the ice risk appears to be much lower than just it did 24 hours ago. There still could be slick spots on the roads in the morning, but we don't expect much ice build-up.

THIS AFTERNOON: We've had a little bit of rain/drizzle earlier today and now we're seeing some more drizzle. There are also areas of fog. Through the day the temperature has been around 34 in Lubbock, with it freezing for northern parts of our area. Here is the current temperature:

And here is the current radar:

THIS EVENING: Expect a little bit of drizzle or light rain, temperature dropping a few degrees. Roads should be good through the evening, mainly just wet. But there could be an icy patch on bridges.

TONIGHT: Actual coverage of showers will increase late tonight through Saturday morning. This should mix with some sleet before changing over to snow around Midnight. Before then some snow or flurries could mix in with drizzle/rain. Low temp near 30, which means roads may be in decent shape even where it snows.

The latest guidance has backed off on snow totals. We're now thinking much of the area will get an inch or two of snow, a few locations up around four inches. And yes, this is still a storm system that has some strength to it (it's going to produce lots of rain downstate), so we could still wind up with a few isolated heavier bands. This is a general idea from our high-resolution model: 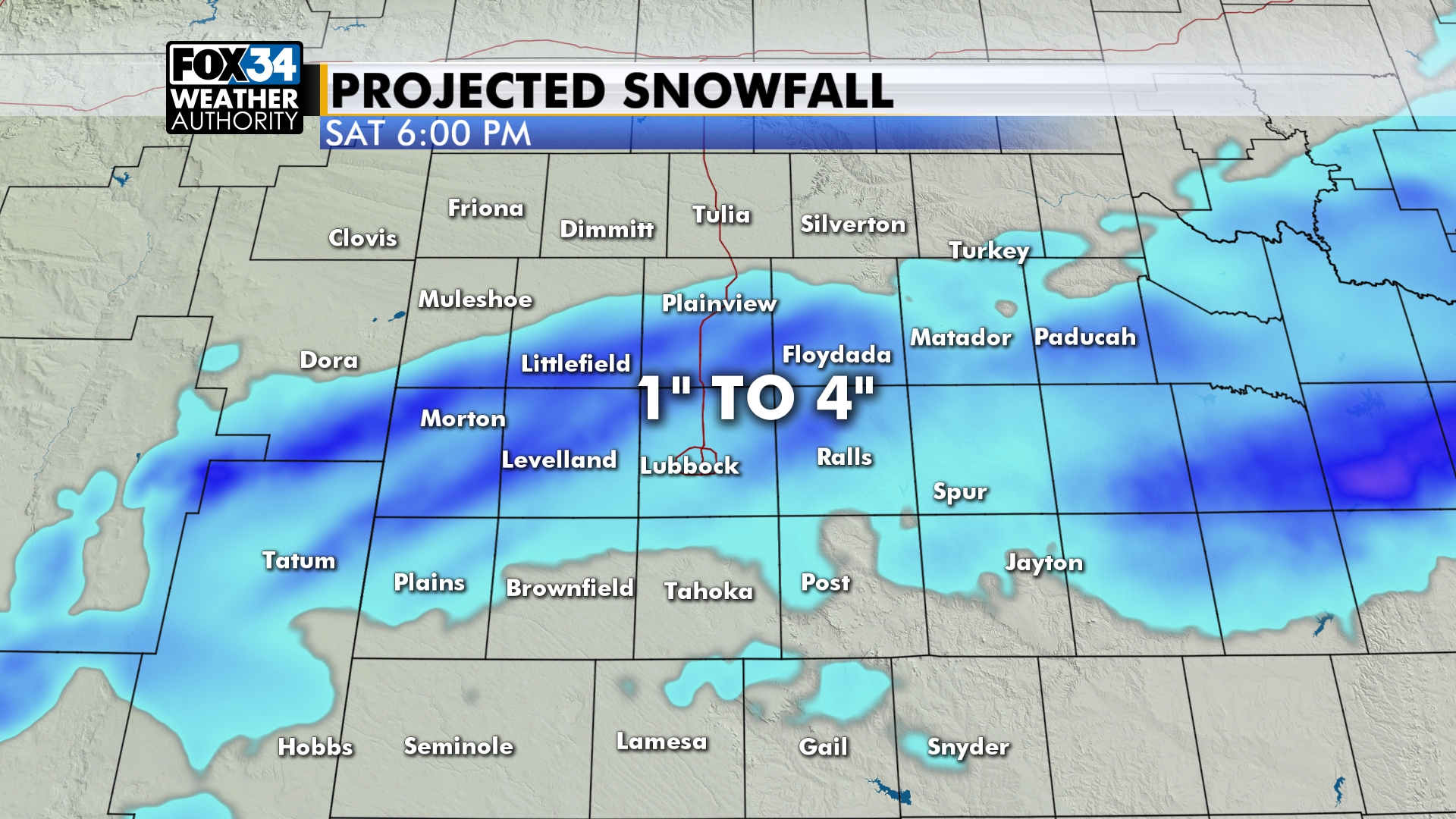 I will mention that there is little consensus among computers on where the bands of 2" to 4" could wind up...everywhere from western, central and southern parts of our area. When I see that it gives me little confidence.

There's major adjustment for the southern Panhandle, around Tulia to Turkey. Yesterday it looked like a good bet at 3" to 6", now there may not be any snow at all. This storm system is trending much farther south than earlier expected. And computer models have been all over the place on what we should expect. I'll admit, this has been a tough forecast with the end result to you...a lot of changes, which isn't great. I wish it could've been better. West Texas winter weather always brings challenges.

NEXT FEW DAYS: It'll be colder Sunday morning, low in the lower 20s. By the afternoon sunny, mid 40s.

Next week will climb back to the 50s, with more wind likely Wednesday and Thursday.

I'll have the latest update to the forecast tonight on the News at Nine. Bobby, Robert and I will be watching this late tonight and early tomorrow. Look for updates here online through then. Stay warm.