Winter weather forecasting in West Texas is tough. There are always surprises. Below is our team's latest thinking. Be sure to check back in the coming days as we get newer data and update the forecast.

THIS AFTERNOON: Clouds have increased along with the wind. The temperature has climbed to the lower 50s around Lubbock.

TOMORROW: A cold front will move through in the morning, ushering in a northeast wind that'll be gusty at times, 10-20mph. High temp 41, with the temperature dropping some through the afternoon. Slight chance for some light rain.

WINTER STORM WATCH: There's the potential for difficult travel in our area from ice and snow. But it still appears this won't affect all of our area. The greatest concern for travel is Friday night into Saturday. The National Weather Service has issued a winter storm watch, in blue below, for the potential for wintry conditions causing significant travel problems. 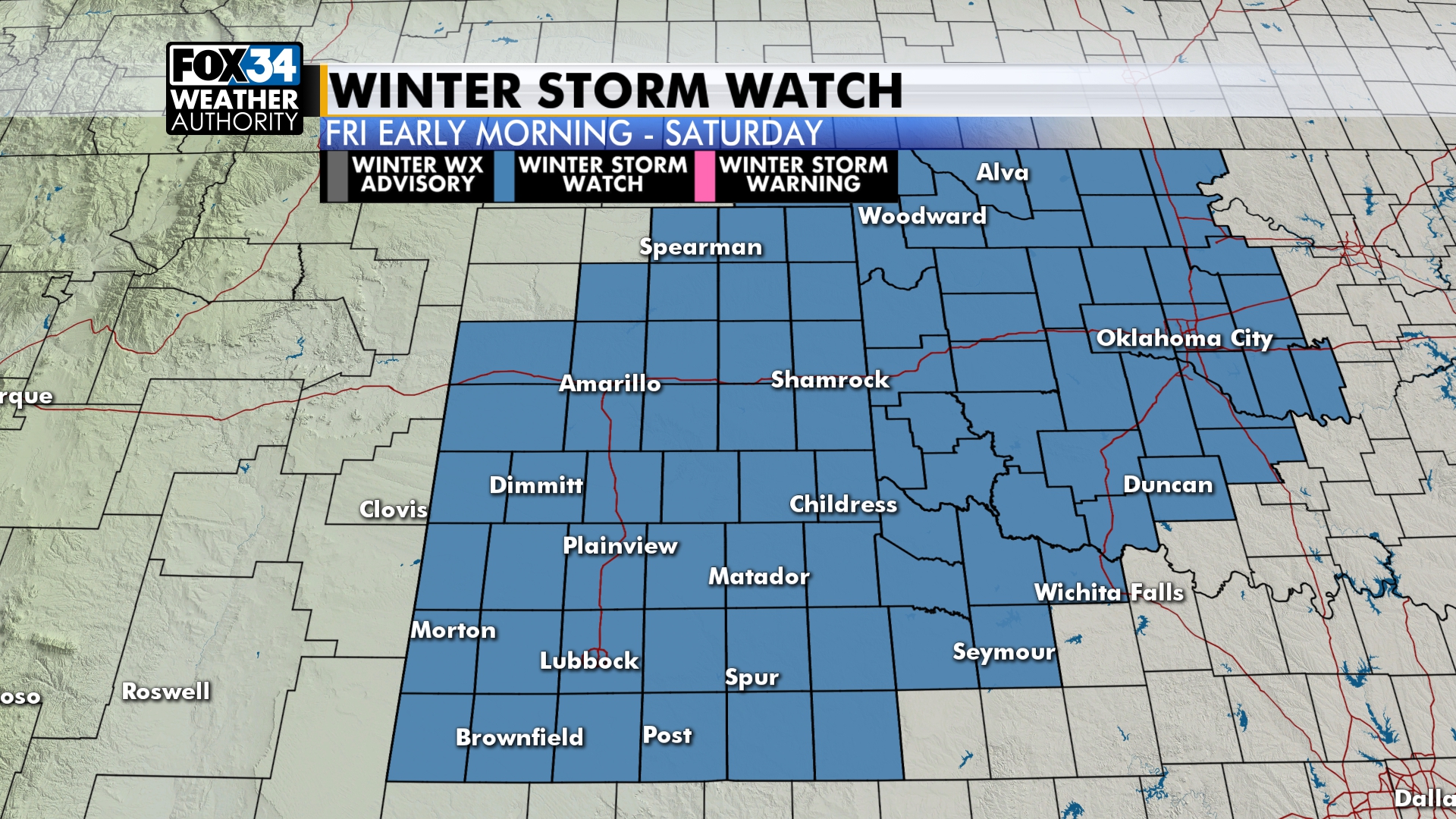 FRIDAY: As an upper-level storm system approaches from the west, we'll see showers increase Friday. It'll be cold enough early Friday that some of this could be freezing rain. But during the day around Lubbock it looks like this will be rain. That said, we are really walking a fine line on this temperature forecast. The data continues to trend colder. Right now we're forecasting a high of 34, with the temperature 31-34 through much of the day. This would put the greater icing risk north of Lubbock.

But, if it turns out a little bit colder, we would have freezing rain during day in Lubbock and points south. One thing that's been consistent in the guidance for days is we'll have a lot of water falling from the sky; the inconsistent theme is whether the end result to you is rain, freezing rain, sleet or snow.

There should be a layer of air a few thousand feet up in the sky above freezing, which is why we aren't expecting snow during the day. But if the temperature is down to 29-31 during the day Friday, we'll start to see some icing.

The National Weather Service advises in its outlook some thunderstorms are possible Friday afternoon and night.

FRIDAY NIGHT: Showers are expected to continue Friday night, with that "warmer" air aloft diminishing. This should lead to a mix through freezing rain, sleet and eventually snow by Saturday morning. Low temp near 28. This is when we're more concerned with icing.

SATURDAY: Snow showers gradually tapering off from west to east. High temp only in the low to mid 30s.

HOW MUCH?: The greater concern is over ice rather than snow. There's the possibility for anywhere from a light glaze and minimal road impacts to a few tenths of an inch of ice build-up Friday into Saturday. Any ice makes driving tough. While we aren't projecting this area-wide, there may be a few locations that receive around 1/2" of ice, which is significant.

Snowfall totals from a dusting to a few inches by mid-day Saturday. This isn't anything major if it were just snow. But snow on top of ice does make it a lot tougher to drive.

It'll clear out Saturday night through early next week.

I'll have some new data tonight on the News at Nine and Bobby will have the latest forecast update early tomorrow. Have a great rest of your day.
-Matt