Some heavy rain possible through Friday

SETUP FOR HEAVY RAIN: There's a lot of humidity in the air here, even with a few showers that have popped up through the afternoon. Big picture shows a mid- to upper-level trough swinging across the Rockies with a healthy line of showers and storms from southern New Mexico into the Upper Midwest. There's also a front to our north, which will push across our area tomorrow.

Closer to home, the showers that have developed this afternoon are slowly moving from south to north. Meanwhile, much greater coverage of showers and storms is over New Mexico, with individual cells moving northeast and overall coverage spreading to the east.

TONIGHT: Coverage of showers and storms will increase through this evening into late tonight continuing through early Friday morning. All of our area has a pretty good chance to get some rain, with areas east of Lubbock most favored for the heaviest downpours. There will probably be a few locations that miss the rain, but the coverage will be pretty nice compared to what we usually get.

Common totals of 1/2" to 1" can be expected, but where multiple showers and storms move across the same area totals of greater than 1.5" are possible, isolated totals above 2.5". It'll fall quickly. Because of this the NWS has issued a flood watch for the eastern half of our area tonight through Friday. 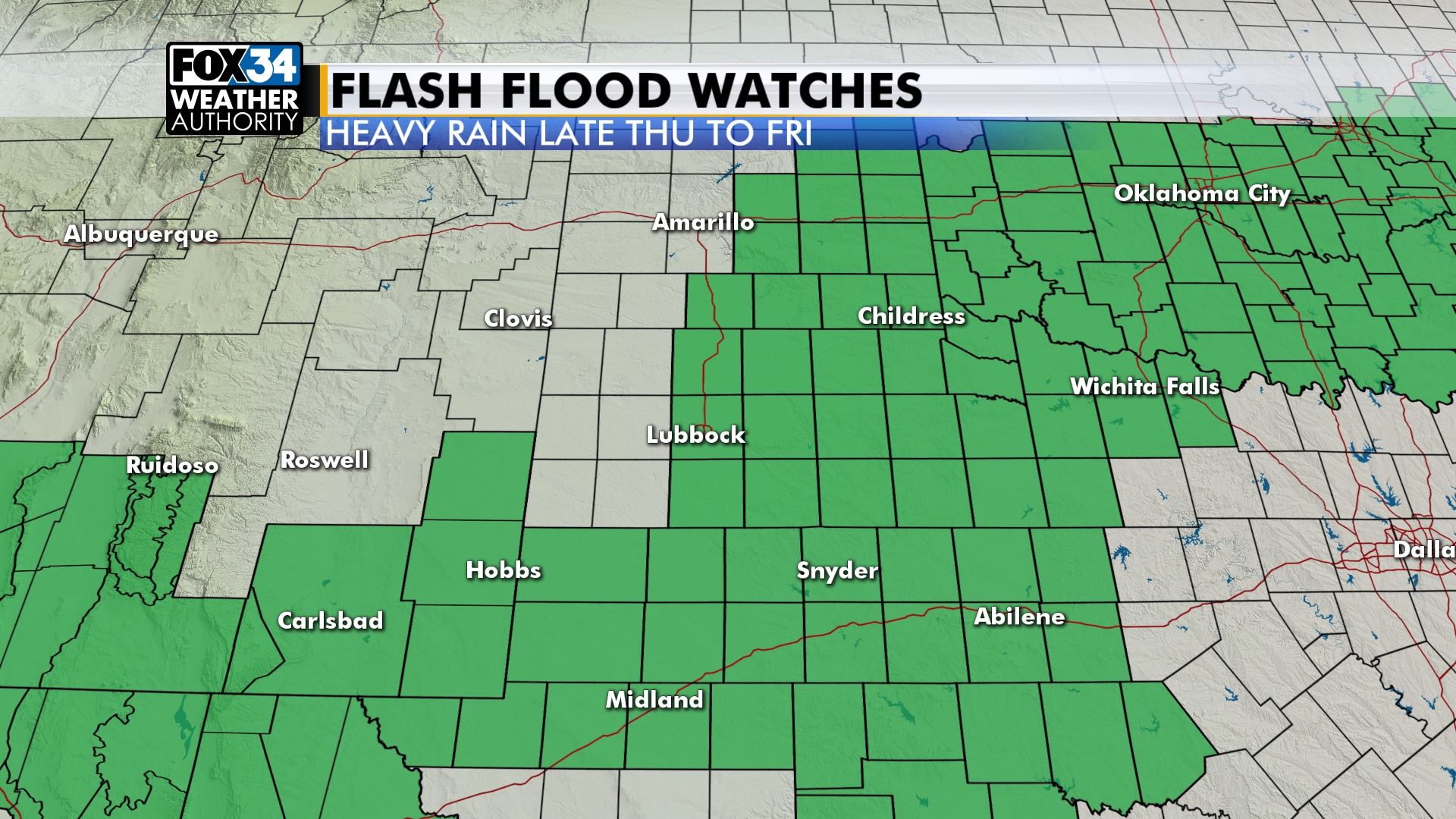 Flash flood watches cover much of the region, shown in green above. They expire earlier to the west, later to the east.

FRIDAY: The best rain chance for rain is early in the morning. Through the day the heavier rain will move off to the east. In Lubbock, we may be done with rain by 7 a.m.

But because a fairly strong front will move across our area, we'll keep a chance for a shower or storm through the afternoon. That front will kick up the north wind to nearly 30mph. High temp is tricky tomorrow, especially if it rains during the afternoon. Also complicating the temperature forecast is cooler air will follow the front.

We're forecasting a high near 71, with the temperature dropping a few degrees through the afternoon.

It'll be chilly (OK, for what we've had as of late, it'll be warm if this were late in the season) for football games tomorrow night. Kickoff in the lower 60s dropping to the upper 50s late, gusty north wind. There might be a lingering shower, generally to the SE of Lubbock.

WEEKEND: Provided the clouds start to clear some late Friday night into early Saturday, it should drop to the mid 50s. Saturday will be mostly sunny. We've bumped up the forecast high to 76 and removed the rain chance.

Sunday morning we're forecasting 54 in Lubbock with some upper 40s to the northwest of the city. High 79, sunny.

NEXT WEEK: Monday should be the warmest afternoon, reaching the mid 80s. We've got a slight chance for storms late Tuesday into early Wednesday. Computers are going back and forth on how strong that next front is. For now we're dropping the high to the mid 70s, but may need to adjust lower if the front proves strong enough.

Look for more updates here and on social media tonight through the morning. We'll have more on FOX34 News at Nine. Bobby will post a full update here in the morning.
-Matt